Skylanders fans around the world are going crazy with the news of new figures and vehicles being released. With wave 4 Activision seems to have some surprises for us let’s take a look.

Thanks to Dark Spyro, MySkylanders.de, SCL, and Skylanders Inquirer we have images of what the vehicles will look like. There are 5 vehicles included in this wave one being the Easter in – game variant Spring Ahead Dive Bomber. The other vehicles are…

Hot Streak is making it’s first appearance outside of the starter pack. This is a great opportunity to add this vehicle to your collection without buying a starter. For those of you that just want Astro Blast and Sun Runner you have your chance to do so as well. I think it would be better to get the racing pack personally so that you can get the trophy, but any way to save cash and still enjoy the game is the goal.

Looks like there are only 3 figures in this wave (4 if you count Happy/Eggcited Thrillipede).

This is a very weird release I say that because the only new figure is Bone Bash Roller Brawl. The other figures have already been released in the Regular Starter Pack and the Sky Racing Pack. Bone Bash will also be included in a Dual Pack with Tomb Buggy and a Triple Pack with Tomb Buggy and Splatter Splasher. Also making a Dual Pack appearance is Big Bubble Pop Fizz and the Soda Skimmer. 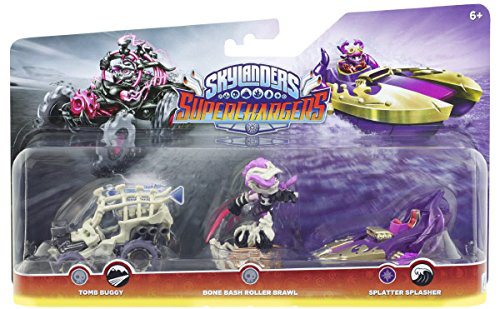 Once again we get more variants in this wave. This time around they are bronze/copper in color. Bone Bash and Tomb Buggy both get the shiny metallic makeover. So far a few of them have been sited. The image of BB Roller Brawl was posted by a store employee on the Skylanders Game page and Instagram user @smoldersmith posted the image of the Tomb Buggy variant.

What in the world check this varient i just bought

I am loving the new variants! This game seems to have the most variants thus far. How do you feel about all these variants? Do you think it is a good or a bad thing for the franchise? Will you be chasing these down? Let me know what you think in the comment section or sound off on the Facebook page. Follow us on Twitter, Instagram, and all our other social media pages. Until next time I’ll catch you on the SKYSIDE!

Comments Off on Wave 4 Plus New Variants