I covered this info a while back in a post but it now has officially been confirmed that King Cobra Cadabra and Steampunk Shrednaught will be exclusive to GameStop stores. 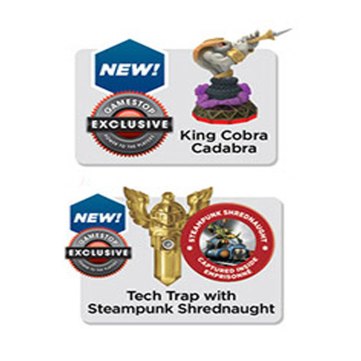 I got an email like I’m sure most of you have stating there would be another Skylanders Day June 27, 2015 at GameStop. We all know how I feel about Skylanders Day at GS, but things look promising this go around. Here is a look at the deals going on all week.

As you can see there will be various sales going on throughout the week starting tomorrow June 24th, but there will be a set of sales that will only be valid on Skylanders Day the 27th. Here is what you can expect to see on sale during the day of the event.

The deals that stand out the most to me are the Buy 1 Get 1 Free Deal the day of the event I’ll be taking advantage of that deal to get King Cobra Cadabra. I will also be preordering the game and getting my Shreadnaught trap as well as I am a member of the Skyalnders Adventure Club have been since the beginning. If you haven’t joined the club you should it’s free and you get free figures! Of course there are stipulations, but it pans out.

If you still need a starter pack I would get one now as this is an awesome deal with a nice amount of Skylanders extras. The best deal out of all the sales would have to be the Eon Elites being Buy 1 Get 1 Free. I’ll be taking advantage of this sale as well to get the last two Elites I need (Eruptor & Gill Grunt).

Will you be attending Skylanders Day? What will you be getting? Until next time I’ll catch you on the SKYSIDE!