Activision Switching It Up! Skylanders Imaginators Coming To Nintendo Switch

Happy New Year Portal Masters! This year has started off rocky for us Skylanders fans with all the rumors going on about the series being canceled. It has had the community on edge to say the least. There seems to be a glimmer of hope for us just yet with the announcement of Skylanders Imaginators being released on the Nintendo Switch console as a launch title this coming March. 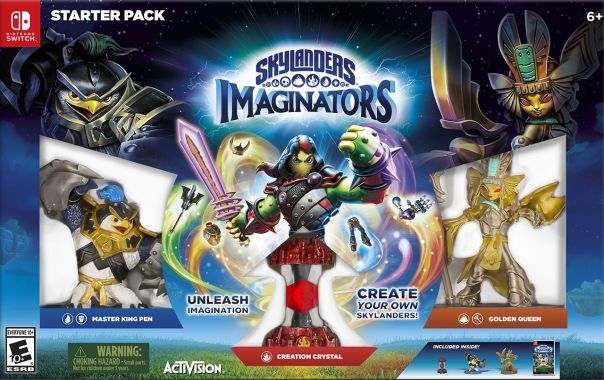 Yesterday Activision announced on their blog that they have developed a version of Skylanders Imaginators for the Nintendo Switch and boy does it sound AWESOME!!! New exclusive functions have been added to this version of the game making it more user friendly. The biggest addition is that we won’t need a portal! That’s right you read it correctly NO PORTAL REQUIRED!!! The new scan function exclusive to the Nintendo switch now allows us to scan our 300+ physical toys into the game and store them in a digital library for on the go Skylanders action!

Since Skylanders Imaginators and the Skylanders Creator app launched, fans have created and customized more than 25 million Imaginators, and we can’t wait to see what they do with the Nintendo Switch. Paul Reiche, co-founder and studio head of Toys for Bob said, “We’ve seen some amazing Skylanders created, and as kids’ collections continue to grow, we’re proud to offer more depth and variety to fans in ways never before possible with this new system.”

Not only are we getting a new version of the game but we are also getting new figures, a new Adventure/Level Pack, and Skylanders Academy will be returning for a second season  as well! By the way, if you haven’t had a chance to check out the show on Netflix you should it is totally BOOMTASTIC!!!

Also coming for Skylanders Imaginators in March will be the Cursed Tiki Temple level pack. This new pack takes players on an all-new adventure where they can unlock more than 100 new offerings for their Imaginators. The pack includes a new Sensei character, Wild Storm, a life Creation Crystal, and an Imaginite Mystery Chest.

And later this Spring players will be introduced to another new Sensei, Grave Clobber. Once a great pharaoh who ruled the Golden Desert long ago, Grave Clobber was buried by his seven jealous brothers in an underwater tomb while he was sleeping.  He eventually rose from his watery grave, clobbered each of his brothers and became the perfect choice to be a Sensei trainer for the Brawler Class.

I’ll be on the hunt for these two for sure! We now will be able to open all of the hidden islands with the release of this new level pack and I can’t wait! Doesn’t Grave Clobber look so Boss? If you noticed this Adventure/Level pack will be different than the previously released ones in this series it will include a Mystery Chest.

Are you going to be getting the Nintendo Switch? I know I am not just for Skylanders either. You can pre-order the Nintendo Switch and the new version of Skylanders Imaginators now at GameStop and other participating retailers. I provided a link below for those of you that are interested. You can read the full article from the Activision blog by clicking the source link. Until next time I’ll catch you on the SKYSIDE!