As I mentioned in the last post this years easter edition figures have been revealed. According to myskylanders.de and darkspyro.net user Chaotic Lunacy we can expect another villain variant trap this easter. Red Hot Tussle Sprout is said to be a TRU exclusive with a release date of March 2, 2015. Also there will be an “Easter Edition” figure pack including Power Punch Pet-Vac, Eggscellent Weeruptor, and an exclusive Earth Easter Trap. 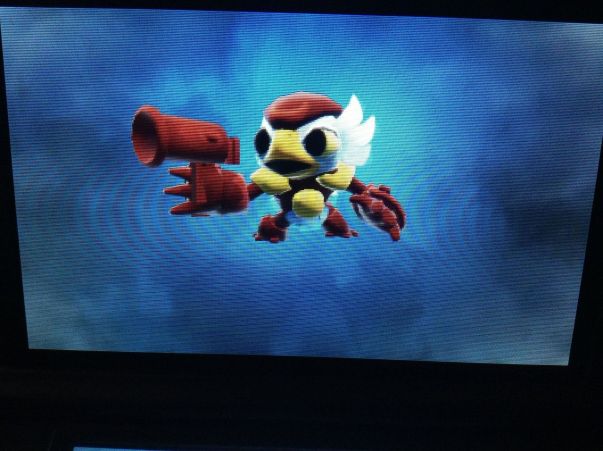 Chaotic Lunacy states that Red Hot Tussle Sprout will be the included trap in the easter edition pack, but myskylanders.de states that Red Hot will be its own trap and an exclusive Easter Edition earth trap will be included in the figure pack. The easter edition rings up at 10.99, but  I am thinking that the $10.99 price is for the Exclusive Variant Trap with RHTS and not the easter edition figure packs. I think that the earth trap will be a separate trap much like the Legendary Traps (no trapped villain just an easter colored trap) included with Power Punch and Weeruptor.

The release date is also March 2, 2015 at TRU for Power Punch Pet-Vac and Eggscellent Weeruptor so get ready folks cause it’s about to be on!I project that these will go fast just like the other easter edition figures that have been released in the past. Are you as excited about this as I am? I sure hope so! Keep an eye out for the easter edition figure packs as they may get an early release by another store trying to beat TRU to the punch. Enjoy the rest of the images in the gallery and until next time I’ll catch you on the SKYSIDE! 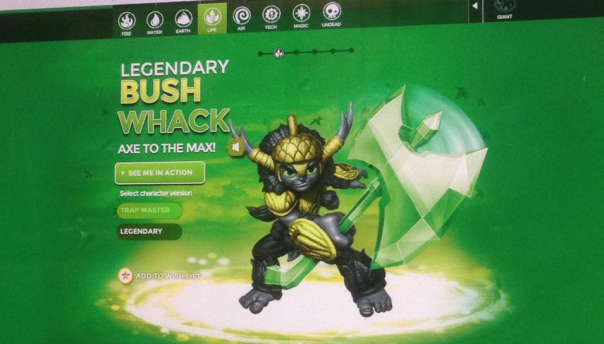 LP Pop Fizz is just too cute I plan on customizing one and flocking it. This info was spotted on DarkSpyro.com posted by DS user Chaotic Lunacy said to have come from a reliable source.

Guess we will have to see if he is right when the time comes. Until next time catch you on the SKYSIDE!

Looks like there is a new villain variant coming to a portal near you! Right now you can preorder Steamed Broccoli Guy already trapped exclusively in an 8 pack trap key set at walmart.com

This is a pretty good deal I would be getting my pre-order on if I were you. Thank to Matteomax from darkspyro for the tip. Until next catch you on the SKYSIDE!

Looks like Germany Portal Masters will have a chance to get Riot Shield Shredder as a Pre-Order Bonus for Skylanders Trap Team. This is good news for our friends in Germany and us mad collector’s here in the US. We of course know us package freaks will have to have both versions of this exclusive trap. Thanks to Ghost Roster over at ghostroaster.com for sharing this information with us. Until next time “Catch You On The Skyside!”

Looks like our favorite spiky air Skylander Pop Thorn is coming to us in single pack form. This version of Pop Thorn seems to have a slightly different paint job. This is awesome news for those of you that haven’t yet had a chance to get him in the Tower of Time Adventure Pack. If you are looking to add this version of Pop Thorn to your collection. Head on down to your local Target and get him before all us other Portal Masters do. Until next time “Catch You On The SKYSIDE!”

Someone is selling the final variant of the half and half colored Skylanders Swap Force figures. Who is it do you ask??? It’s DOOM STONE! and he is the coolest of the three variants in my opinion. I’m happy to see Doom Stone was chosen as the final variant like most of you he is a character I am really anticipating to be released. Don’t know where the seller got the figure from, but some portal masters on Dark Spyro are speculating that he/she maybe an employee or some one close to an employee of Activision because they are also selling the employee editions of Fire Kraken and a Smolder Dash as well as 2014 Toy Fair Edition Dune Bug. If you are interested to get this or any of the others listed go to ebay and check it out I’m sure they are going to sell for tons of money. Heck they maybe entered into the You Paid That Much For A Skylander Hall of Fame lol! Check out the pic below and let me know what you think about it. Special thanks to GrowUpKids for sending me the pic and Dark Spyro User newkill for originally posting it. Well that’s it for now catch you guys on the SKYSIDE! 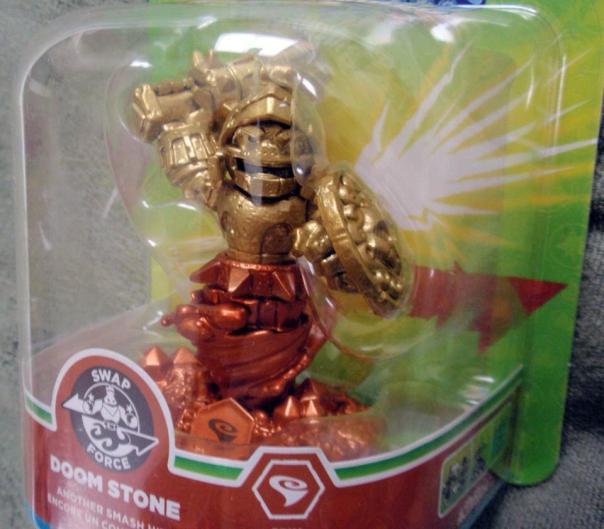 How goes it? I just wanted to give you all a heads up. According to MatteoMax over at Dark Spyro Light Core Bumble Blast has been obtained by another fellow Portal Master by the name of Okaps. The figure supposedly was found on a chinese website that normally sells junk Skylanders or non-working figures I assume it was Alibaba or Ali Express, but not sure.

There is no release date so we don’t know when it will be released. We just hope Activision doesn’t do what they did with Light Core Hex and make us pre-order it with the release of Skylanders 4. Seeing as the promotion for LC Hex didn’t go so well I would assume that they won’t make us wait, but we never know.

All I can say is keep your eyes peeled cause we never know when he can turn up in the wild. Check out the pictures below and tell me what you think about the figure. I totally can’t wait until he is released he is one of my favorite new characters. Well that’s it for now special thanks go to MatteoMax and Okaps for sharing the photos. Don’t forget we are running a contest on our Facebook page once we get 2,000 likes we will be giving away a brand new in the box Best Buy Exclusive Heavy Duty Sprocket! This contest is open to US and over seas residents. Good Luck Addicts and Happy Hunting! Catch you on the SKYSIDE!

Oh Boy! Do I have some good news for all you addicts out there. Today while I was doing my usual search for new stuff I came across a post on Dark Spyro. Dark Spyro reader spyroflame0487 shared this photo of Light Core Enchanted Star Strike found at a local Wal-Mart store. 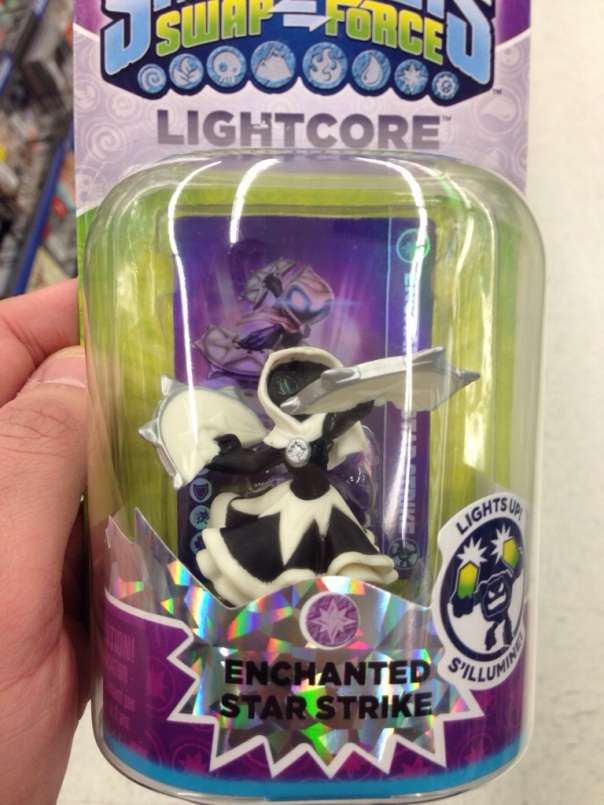 I guess it is safe to assume that each store now has there own exclusives now like Toys R Us. Meaning we will be seeing Legendary Figures at Toys R Us, Enchanted Figures at Wal-Mart, and Nitro Figures at Target. I’m getting ready to go out and grab one or 2 for myself. Special thanks go out to spyroflame0487 for sharing the photo. Good luck on the hunt everyone catch you on the SKYSIDE!

The internet has been going nuts about the Skylanders Mega Bloks images released by figures.com earlier today. They are pics of the upcoming Skylanders play sets, vehicle sets, construction sets, etc. that Mega Bloks will be releasing later this year. There are some familiar faces making another appearance, but a few things stick out like sore thumbs. There seems to be a few new characters pictured in some of the unreleased sets. Rumor has it that these are some of the new characters and items that may appear in the new Skylanders game.

We can see a Gold Lion character being released with the up coming Fire Fortress Elemental Zone construction set.

There also seems to be a knight character that seems to have a Legendary Skylander color scheme (black/gold) being included in the Cutthroath Carnival construction set. He strongly resembles the Undead Giant prototype that never made the cut (see pic below).

There also is a set of ranger vehicles and hero figures that look really cool!

Again we see a new character in the Sky Hero Figure set he is toting twin Mega Hammers. I can’t tell what he is but he is orange and is wearing a gold helmet as well. Can one assume that these figures and vehicles will be added to the new game. If so will all the characters have a vehicle or will it be just a choice few? Maybe just the series 4 re-poses? Hmm…. 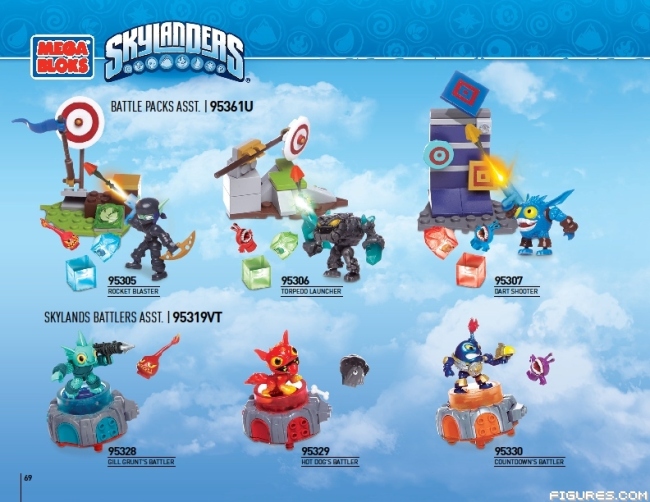 There are pictures of other things that will be released such as Battle Packs and Battlers, which seem to be the new version of the battle portals.

There is also a new set of weapons being released, which are Chop Chop’s Sword and Ranger Bow & Arrow. 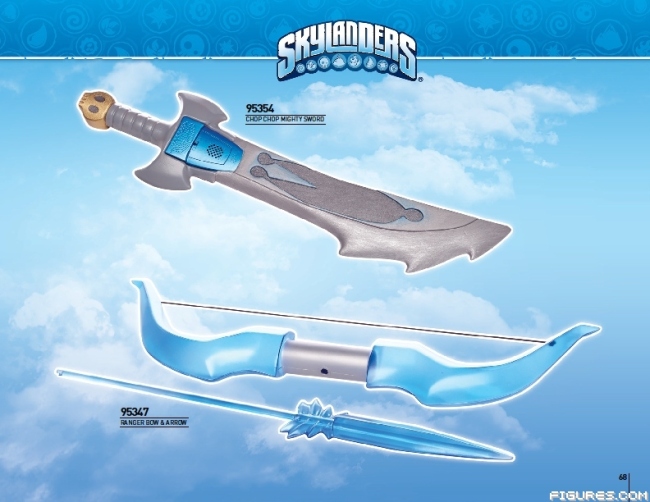 Now I know you maybe asking yourself what is a Ranger Bow & Arrow? Well there is a picture of a new dragon warrior or lizard fish character being released in the Skylanders Pirate Cove construction set. He is wielding a bow and arrow that resembles the Ranger Bow & Arrow pictured. We are assuming that Ranger is the name of the unknown character, but we have no conformation of that until we get more updates about the new game. 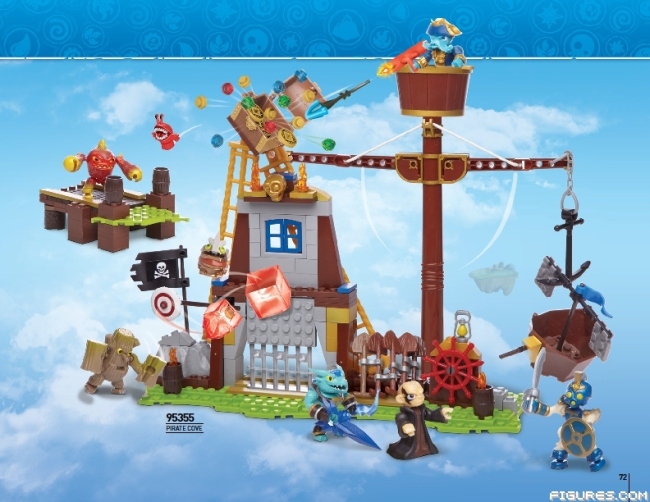 Apparently, the newest installment to the franchise is and I quote “A Game Changer”. So what do you think Activision has up it’s sleeve? Are you even more excited to see what the new game will be? Well, whatever it is I can’t wait to see it, own it, and play it! As always we will keep you updated as we get more information. Special thanks to Figures.Com and Dark Spyro followers Diggeh and Mattomax for sharing the info. Catch you on the SKYSIDE!