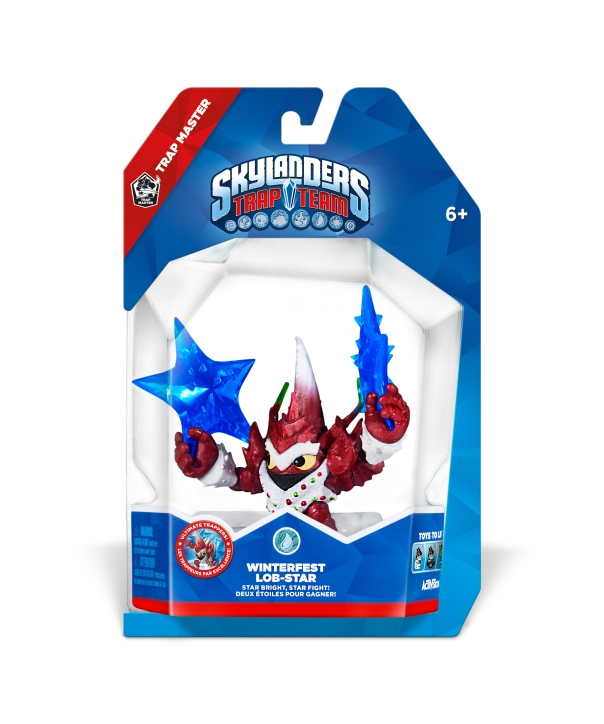 Yesterday I announced that Winterfest Lob-Star is coming to retailers soon in the US, but I didn’t know about a UK release. Well that is no longer the case as GAME UK will be stocking the shelves with this in-game variant as early as December 1st. But wait that isn’t all! If you are a GAME Skylanders Club Member you will get early access to this beautiful figure on November the 29th.

Also I know alot of you have asked about the Kaos Trap and the 8-Pack Trap Pack well I have a little info for you on that as well.

Looks like GAME has received a shipment of Kaos Traps in very limited quantity so If you are still looking I would head down to your local GAME store before he sells out again. As for the 8-Pack Trap Pack Argos has had it listed for a long time with no release date, but there is a rumor that it will be hitting shelves the first week of December as well.

The 8-Pack is the only way you will get the rare Tiki Tech Trap and the in-game villain variant Steamed Broccoli Guy so be on the look out for these so you don’t miss out. If they are released anything like they are here in the states stock will be very limited so make sure to get yours immediately or be forced to duke it out EBay style. I Hope this bit of data helps you out on your hunt this holiday season. Well I’m going to get some lunch and keep looking for more deals for all you addicts out there. Until next time I’ll catch you on the “SKYSIDE!”

Editors Note: Kaos Trap has unfortunately SOLD OUT, but keep checking with your local GAME store I’m sure he will turn up again.

This website is dedicated to giving information about the Skylanders game, Skylanders toy deals, Skylanders in store events, Skylanders contests, and the world of collecting Skylanders Merchandise. Lennon George Owner/Creator of the website has been into Collecting and Writing for many years, but they are just a few of the things that he really enjoys. When he is not collecting he is producing music with his production team GoReaLaTuneZ. He also strives to be a good husband to his wife and father to his three children. For questions or media inquires he can be reached by email at skylander.addicts.collectibles@gmail.com
View all posts by Lennon "LJ The Toy Addict" George »