I have some good news! Most of us have been seeing Light Core Pop Fizz and Chill online on sites like Amazon.com and Ebay.com. Toys R Us has had them up for pre-order for months now! (well at least Pop fizz LC Chill here as of late) Well today while hunting I found LC Pop Fizz and LC Chill at my local Toys R Us they were $12.99 each.

There where only a few hidden amongst other figures (almost didn’t see them). I also found a few other interesting things at TRU and Target as well check them out below.

Skylanders 3D Jumbo Eraser and Mystery Pencil Topper $3.99 at Target same as the other puzzle erasers you get from Wal-Mart and TRU, but the package is different and comes with the mystery topper. Choose from Swarm, Crusher, And Tree Rex not sure if all the toppers are available in the mystery packs or just 3 of them. Let you know when I find out.

Last but not least we have the Skylanders 3D Puzzle blind bag $2.99 at Target as well. Now this would be cool if it wasn’t the same three most of us already have! Maybe they will surprise with some new ones in the future my kids have a ball playing with them. The greatest part is if they break apart no worries just put it back together and keep playing! 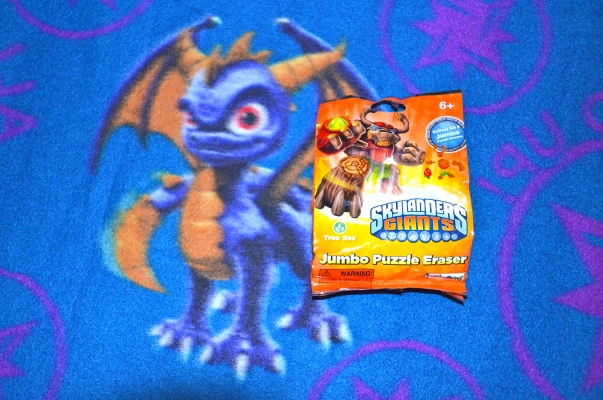 Well that’s all I have today for you guys catch you on the SKYSIDE!

Thanks to a little info from Portalflip.com we have news that Polar Whirlwind is in Canada as a Gamestop Exclusive. As Atlus said we should be seeing them pop up here in the US very soon as a Gamestop exclusive don’t know for sure as of yet but it is rather likely.

This website is dedicated to giving information about the Skylanders game, Skylanders toy deals, Skylanders in store events, Skylanders contests, and the world of collecting Skylanders Merchandise. Lennon George Owner/Creator of the website has been into Collecting and Writing for many years, but they are just a few of the things that he really enjoys. When he is not collecting he is producing music with his production team GoReaLaTuneZ. He also strives to be a good husband to his wife and father to his three children. For questions or media inquires he can be reached by email at skylander.addicts.collectibles@gmail.com
View all posts by Lennon "LJ The Toy Addict" George »